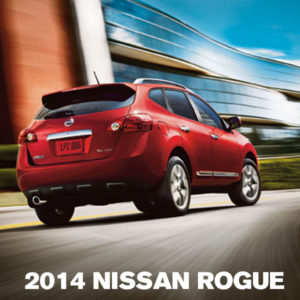 - All-new crossover recognized for practicality and sophisticated interior; joins the ranks of 2013 Pathfinder -

NASHVILLE, Tenn. - Fresh off a record-setting March, encouraging news continues to pour in for the all-new 2014 Nissan Rogue. Today, AutoTrader.com, a leading resource for car shoppers and sellers, named the 2014 Rogue a "Must Test Drive" SUV for 2014. According to AutoTrader.com research, the test drive is considered one of the most influential parts of the decision making process for car shoppers, an important incentive to put together the "Must Test Drive" awards each year. The 2013 Nissan Pathfinder was named to the list last year.

In selecting the Rogue to the "Must Test Drive" list, editors at Autotrader.com noted the completely redesigned crossover's "affordability, versatility and refinement," and impressive features such as available third-row seating and Around View Monitor. Editors also pointed to the Rogue's revamped interior and best-in-class 33 miles per gallon (mpg) highway fuel economy in front-wheel drive models*. As AutoTrader.com Site Editor Brian Moody wrote, "The 2014 Nissan Rogue is simply the best compact SUV available."
For Nissan, this accolade comes on the heels of news that Rogue set an all-time monthly record with 19,420 deliveries in March 2014, an increase of 26.3 percent. Nissan's second-best selling vehicle has enjoyed impressive numbers since it went on sale in November 2013 - in its first full month of availability, sales of the 2014 Rogue were up 27.8 percent, and sales have only continued to climb since.
"With a wealth of new features, a revamped interior, superior gas mileage and much more, the 2014 Nissan Rogue was re-created to compete with the best in a very competitive segment," said Dan Mohnke, vice president, Nissan Chief Marketing Manager & Marketing Operations. "So far, sales numbers have confirmed it's doing just that, and recognitions like this one only point to increased success in the future. Realizing the tremendous influence of a test drive, we're especially grateful to be included in AutoTrader's 'Must Test Drive' list."
The Nissan Rogue, which was completely redesigned for the 2014 model year, challenges convention once again with bold emotive styling, a premium interior created with comfort and multi-tasking in mind, and an array of available affordable technologies. Rogue offers optional 3-row/7-passenger seating, along with exceptional passenger and cargo flexibility with its innovative EZ Flex seating System and innovative Divide-N-Hide Cargo System. Every 2014 Nissan Rogue is equipped with a responsive 2.5-liter 4-cylinder engine rated at 170 horsepower and 175 lb-ft of torque. The engine is matched with an advanced Xtronic transmission. Rogue comes in three well-equipped models, S, SV and SL, each in a choice of front-wheel or all-wheel drive.
The 2014 Nissan Rogue is available at all 7 Mossy Nissan locations in San Diego. Shop for your today
CREDIT:http://nissannews.com/
CATEGORIES »
New Inventory , News , Testimonials ,
TAGS »
2014 Nissan Rogue , Nissan Rogue , Nissan Rogue San Diego , nissan san diego , Nissan SUV ,
SHARE »
Share
Tweet