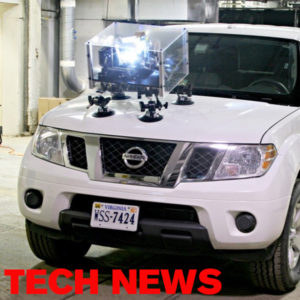 A couple of years ago we heard about an experimental headlight system being developed at Carnegie Mellon University, that allows drivers to see through rain and snow more easily. It does so by selectively not illuminating individual raindrops and snowflakes. Now, thanks to recent road tests on the streets of Pittsburgh, its creators have confirmed that it can also be used to keep oncoming drivers from being blinded by your high beams.

Instead of a single bulb or cluster of LEDs, the system uses a DLP (digital light processing) projector. This splits the emitted light into one million separate beams, each one of which can be controlled via an onboard microprocessor.

In the previous research, a camera adjacent to the projector monitored its field of illumination, and detected any falling water droplets as soon as they entered the top of that field. The microprocessor then used algorithms to calculate the drop’s trajectory, and proceeded to deactivate the projector’s light rays along that path – keep in mind, each ray was off for only a matter of milliseconds. The result was that the drop was able to fall through the field of illumination, but with no light rays actually striking it.

In the new research, the camera was also able to detect multiple oncoming vehicles at normal highway speeds, and then dim or disable the beams which would be shining right into their drivers' eyes. The system is also now much faster, so it can respond directly to the camera's real-time output instead of having to use the predictive algorithms. The time lag between vehicle detection and light-dimming is between just 1 and 2.5 milliseconds.

Additionally, the technology is now able to identify items such as road signs or lane markings and increase the intensity of beams illuminating those, in order to help the driver see them more easily. In any case, regardless of what it's doing, the changes in its overall illumination of the road are reportedly minor and "generally not noticeable by the driver."

Although the current prototype is relatively large and bulky, the Carnegie Mellon team plan on miniaturizing the technology to the point that it could be incorporated into a regular-sized headlight.