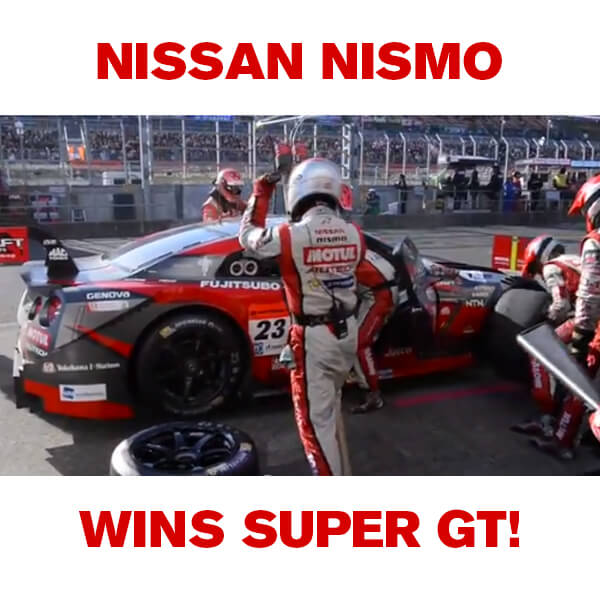 Nov. 16 – Motegi, Tochigi Prefecture - The No. 23 MOTUL AUTECH GT-R driven by Tsugio Matsuda and Ronnie Quintarelli scored its second win of the season and secured NISMO the Drivers Championship title on Sunday, in the last round of the SUPER GT series.

The race at Twin Ring Motegi (4.801km) saw the team start from pole position and immediately shoot out in front, pulling away from the pack. Quintarelli pitted at lap 29 and handed the wheel over to Matsuda.

The crew carried out a flawless, lightning fast pit, sending the #23 machine back out onto the track in a provisional 2nd place.

Matsuda executed an impeccable drive to regain the gap over the competition, ultimately crossing the finish line with the margin at 52 seconds.

“My heart was pumping right up until the final moments of the race because you never know what can happen. To win the race and become the champions is the perfect end to the year. At the beginning of the season, NISMO proclaimed that it would be by far the strongest new machine built under the renewed regulations and I’m relieved to see that today we have proved that.”

“I’ve been competing in the SUPER GT for quite some time and I just haven’t been able to get my hands on a championship so I was starting to think that maybe I had missed my chance. However, all those worries have enabled me to appreciate this moment even more. I want to thank, from the bottom of my heart, everyone in the team who built an incredible car as well as all the fans.”

“I was really confident in the car’s setup and choice of tires even before we arrived at Motegi. We were able to ride on such a good momentum because everyone in the team was brimming with energy. I’m ecstatic to be able to win a championship in front of such a huge crowd. Thank you all very much.”