The Future is Now: Nissan advances plans to have commercially viable autonomous drive vehicles on the road by 2020 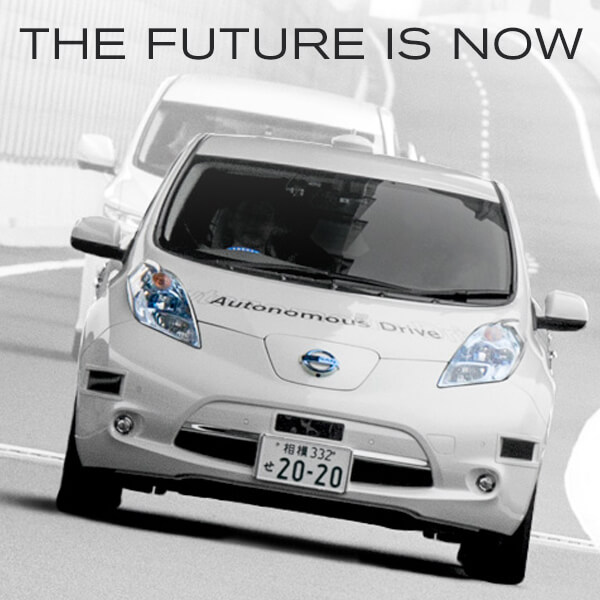 An autonomous car was once the epitome of a 'future' car, something seen only in science fiction-but now Nissan has achieved the technological advancements necessary to begin to make this fiction a reality.

Nissan has been working to develop this technology alongside teams from some of the world's top universities, including MIT, Stanford, Oxford, Carnegie Mellon and the University of Tokyo. The combined research time equals 80 years of research and development, the kind of effort it takes to put Nissan at the forefront of this important development.

The Autonomous Car Means A Safer Ride
The building blocks of autonomous driving technology already exists in Nissan vehicles in the form of Nissan’s Safety Shield-inspired technologies. These technologies can monitor a nearly 360-degree view around a vehicle for risks, offering warnings to the driver and taking action to help avoid crashes if necessary.

The autonomous car takes the basics of the Safety Shield philosophy steps further. The prototype car can drive autonomously on a highway, merging, passing and performing other typical driving maneuvers. This kind of convenience for the driver could ultimately lead to a significant reduction in the 93% of accidents in the US caused by human error and inattention. Further advances in this technology will reduce input needed from the driver, taking the guesswork and chance out of driving and helping to provide peace of mind.

Although Nissan's Autonomous Drive was first announced at Nissan 360 in Irvine, California last August, soon after, Nissan’s CEO Carlos Ghosn was able to take one of the vehicles out for a spin. The ride took place in October at CEATEC JAPAN 2013, Japan’s largest IT and electronics exhibition, where Nissan won the Top Award for the autonomous drive technology.

Soon after, a Nissan LEAF electric vehicle outfitted with the advanced Autonomous Drive Technology was the first to be tested on a public road- it was taken out on the Kasumigaseki and Sagami Expressway, southwest of Tokyo. Nissan Vice Chairman Toshiyuki Shiga came along for the ride and expressed Nissan’s vision, "Nissan seeks a safer, more comfortable and environmentally friendly mobile future."

The Future is Now: Nissan advances plans to have commercially viable autonomous drive vehicles on the road by 2020 - Mossy Nissan El Cajon