Nissan JUKE-R is back – and now with added NISMO 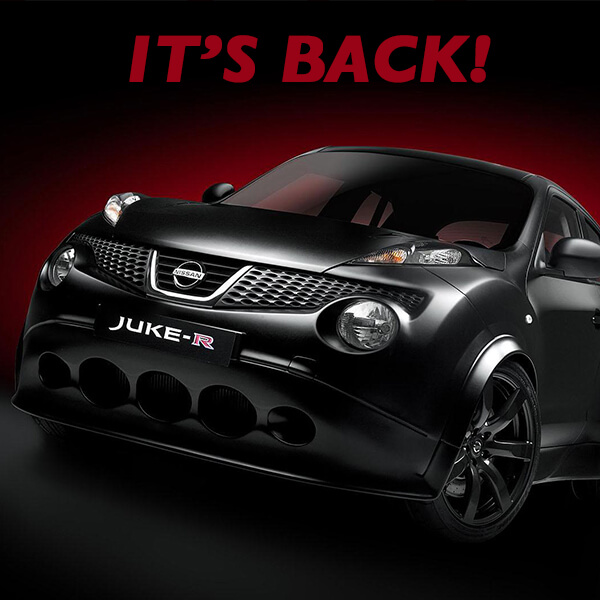 ROLLE, Switzerland - Nissan is set to unleash its latest evolution: the JUKE-R NISMO. Using the latest technology, styling and running gear from NISMO products, the supercar-beating crossover will be unveiled and unleashed at Goodwood Festival of Speed in the UK on June 25.

About Nissan in the UK

Nissan Sunderland Plant produces the Nissan Qashqai, Note and Juke and the 100% electric Nissan LEAF
Production of lithium-ion batteries for electric vehicles began in 2012
Total plant volume since 1986 stands at more than eight million units with 80 per cent of production exported to 100 markets worldwide
Total investment made and announced since then is over £3.5 billion
500,238 units were produced at Sunderland plant in 2014
In 2014, one in three cars built in the UK was a Nissan.
Sunderland Plant currently employs more than 6,700 people
Nissan's European Design Centre is located in Paddington, London and employs around 65 people
Nissan's European Technical Centre is based in Cranfield, Bedfordshire and employs around 1,000 people
Nissan's sales and marketing headquarters in Rickmansworth, Hertfordshire employs around 190 people

About Nissan in Europe

Nissan has one of the most comprehensive European presences of any overseas manufacturer, employing more than 17,600 staff across locally-based design, research & development, manufacturing, logistics and sales & marketing operations. Last financial year Nissan plants in the UK, Spain and Russia produced more than 675,000 vehicles including award-winning crossovers, small cars, SUVs, commercial vehicles and electric vehicles, including the Nissan LEAF, the world's most popular electric vehicle with 96% of customers willing to recommend the car to friends. Nissan now offers a strong line-up of 23 diverse and innovative models in Europe under the Nissan and Datsun brands.