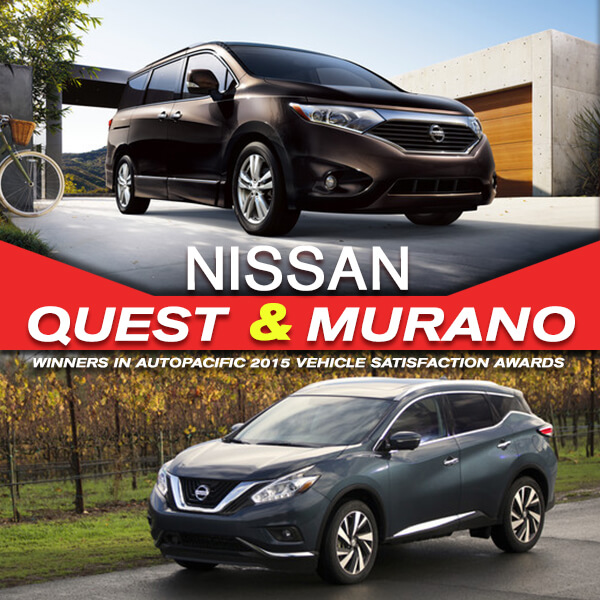 An industry benchmark for measuring how satisfied owners are with their new vehicles, the VSAs differ from other awards in that they are based solely on owner input. The awards objectively measure how satisfied an owner is with 50 attributes ranging from interior comfort and styling to fuel economy and performance. Murano and Quest each won by substantial margins over their respective second place competitors.

"These two Vehicle Satisfaction Awards are particularly significant, not only because they represent the voice of our owners, but also because they are for two very different ends of the family vehicle segment - the seven-passenger Quest minivan and the premium Murano crossover," said Fred Diaz, senior vice president, Sales & Marketing and Operations, U.S.A., Nissan North America, Inc. "It is also great to see Murano bring home the trophy in the first year of its total redesign for 2015."

Sales of the Nissan Murano were up 73.8 percent in June and 39.4 percent for the calendar year to date (versus comparative 2014 sales periods). As the halo vehicle for the Nissan brand and its expanding range of bold crossovers, the all-new Murano carries forward new Nissan design direction with V-Motion front end, boomerang lights, floating roof treatment and efficient aerodynamics, producing a quiet, fuel-efficient driving experience. Inside, the new Murano offers an engaging social lounge feel through features such as the refined lower-height instrument panel, wide center console, advanced Zero Gravity seating, and the airy atmosphere created by the large windows and oversized Power Panoramic Moonroof.

AutoPacific's 2015 Vehicle Satisfaction Awards (VSA) are based on responses to over 66,000 surveys completed in the 1st Quarter of 2015 by owners of new, model year 2015 cars and light trucks in the United States. They purchased their new vehicles from September through December 2014. View the complete 2015 AutoPacific Vehicle Satisfaction Awards here.
CREDIT: http://nissannews.com/en-US/nissan/usa/releases/nissan-murano-crossover-and-quest-minivan-named-winners-in-autopacific-2015-vehicle-satisfaction-awards