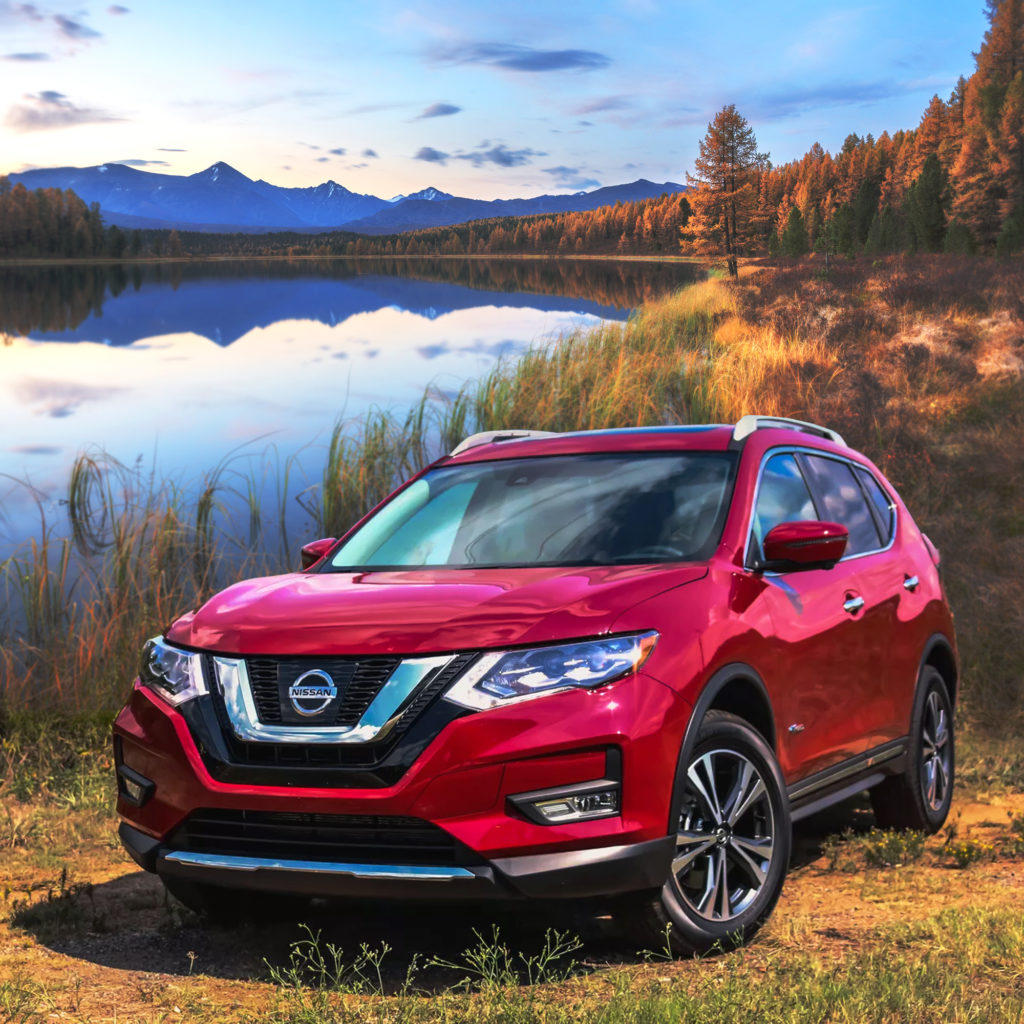 Nissan has a hit with the Rogue Crossover. It tops in the compact crossover market so far in 2017, beating the stalwarts from Honda and Toyota. So to try and further its lead, Nissan adds a hybrid model and gives all the Rogues a face-lift.

This is big news for crossover buyers looking for more fuel efficient compact crossovers. With the addition of this one, it pretty much doubles the hybrids in this class. For the Rogue, there are some gains in fuel economy when compared to the gas version. I managed 29 mpg over a week of mixed driving compared with about 24 to 25 mpg with the normal Rouge a few years ago.
There isn’t big power for this hybrid. It’s about 176 horsepower between the gas engine and electric motor. But that’s more than the non-hybrid version. The Hybrid is quicker, but not tops in the small crossover class by any means. The Rouge will operate on electric power for short periods and with light use of the gas pedal. The CVT transmission works pretty well; yet it has some lag in certain situations such as before it starts to accelerate, and droning on at higher rev ranges. But when it’s driven with fuel economy in mind, it’s pretty pleasant. The brakes work well, and there isn’t much of that weird brake feel that some hybrids have. The ride is good and this year’s model seems quieter.

Outside, all Nissan Rogues get new front-end styling with a redesigned front grill that seems to be showing up on just about all Nissans lately. The rest of the Rogue seems the same as the 2016 exterior, and that isn’t a bad thing at all. The Rogue Hybrid doesn’t look much different from regular versions other than a few badges that say “Hybrid.” The wheels are also nice at 18 inches, and seem to be shared with the gas version. In the top-of-the-line SL trim level, there is a liberal use of chrome trim around the windows and door handles, plus a roof rack for extra storage. Overall, it’s very handsome styling without being over the top like some of the competitors.

The interior is a pleasant surprise on my fully loaded $34,900 Rouge SL Hybrid with a very nice fit and finish. The heated leather seats are very comfortable, probably the best in the class. And the leather-wrapped steering wheel is also heated — a classy touch for a compact crossover. I was impressed with the use of soft touch materials in the front. In that category, I’m putting it above the larger Pathfinder I drove recently.

Passengers in the back seat have ample room, and those seats also fold to create a larger cargo area. The only downside to the Hybrid version is losing some rear cargo room as the floor is up higher than in the regular gas version. There are almost too many buttons to the left of the steering wheel and some can be hard to see when first driving. But that design does provide an uncluttered center dash with mostly audio and climate controls, overall making for a less distracted drive. The center screen is a 7-inch touch screen with an easy to use NAV and a nice around-view monitor which makes parking a bit safer with the ability see around the entire vehicle.

The 2017 Nissan Rogue SL Hybrid is the AWD crossover that’s looking to save compact crossovers buyers some money at the gas pumps. It’s one of those rare times where the hybrid version is the slightly sportier version of the Rogue. Plus, the standout interior brings a touch of luxury to the ever-popular compact crossover market where Nissan strives to stay at the top.

GET YOUR ROGUE HYBRID NOW AT ONE OF SEVEN MOSSY NISSANS ORMossyNissan.com NOW!