HOTTEST CROSSOVER ON THE BLOCK!

Nissan's work van does more for your money!

In the battle of the commercial vehicles, the new Nissan NV work van is quickly making a name for itself. Electricians, plumbers, delivery drivers and workers of all types from all over San Diego are finding the Nissan NV to be a reliable, rugged, versatile work van. It's also extremely customizable! Owners can get custom order their Nissan NV with an array of shelves, bins, rack and containers. The NV can even be configured to be everything from a passenger van, to a delivery vehicle or even a rolling office - complete with desk workspace! This gives the Nissan NV big advantages over competing commercial vehicles- including the Mercedes-Benz Sprinter,previously known as the Dodge Sprinter.

Let's look at how a base model Nissan NV Standard roof SV 2500 out performs the Mercedes Sprinter 2500 Standard roof in several key areas:

With a base model MSRP starting at around $11,000 MORE than the base model Nissan NV* the Mercedes will definitely make a big dent in your wallet. That means you'll be putting in plenty of overtime to pay for that fancy Mercedes hood emblem!

The Nissan NV Passenger has a significantly smaller turning radius than the Mercedes-Benz Sprinter, allowing you to much more easily maneuver in and out of tight spots.

When it comes to horsepower, the Nissan NV will be able to pull heavier loads than the Mercedes-Benz Sprinter. The Sprinter's 3.0L engine puts out a paltry 188 hp. The Nissan NV Cargo's powerful 4.0L engine delivers 261 hp., and the NV Cargo's optional 5.6L V-8 engine provides a whopping 317 hp.

For such a large van, the Nissan NV has a very small turning radius! On a fairly narrow street, the Nissan NV can do a complete 180 without having to back up, impressive considering the NV boasts a 146.1-inch wheelbase and measures more than 20 feet from stem to stern.

It's easy to see that when it comes to work vans, the Nissan NV line of commercial vehicles definitely does more for less! If you are interested in finding out more about these amazing commercial vehicles and how they can help you take care of your San Diego business, contact Chris Vedenoff in North County at cvedenoff@mossy.com or Karl Kirker in South County at kkirker@mossy.com 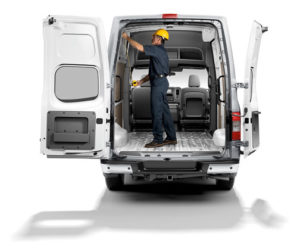 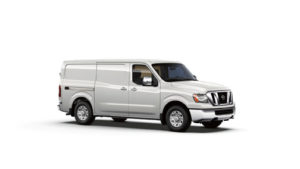