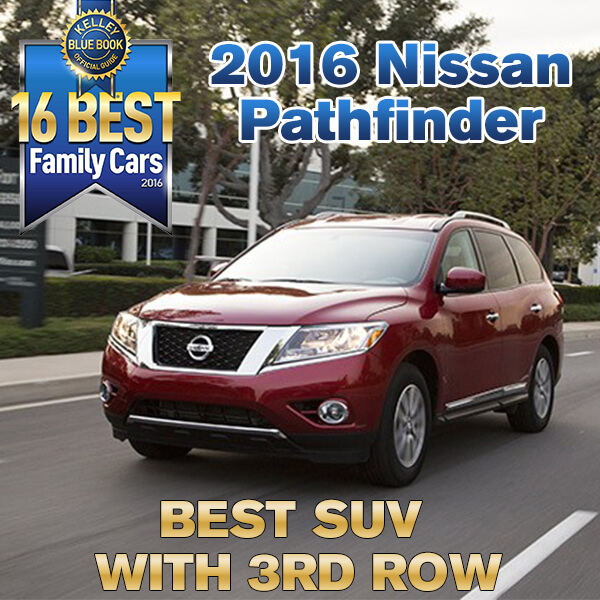 There are three-row crossovers that are newer to the market than the Nissan Pathfinder but this stalwart model remains one of our family-vehicle favorites because of its continuing excellence in offering features that families like. Perhaps the showiest of these features is the Around View Monitor that offers you a multi-faceted view of where your vehicle is in relationship to other stuff, making parking and pulling out of a space in a crowded parking lot a relative breeze. Some luxury brands have now tried to emulate this approach but none has done it as satisfactorily as Nissan has.

No Child-Seat Hassle
Another Pathfinder feature that others have attempted to copy, often less successfully, is the EZ Flex & Glide System that allows a child seat latched in the second row to remain attached when the seats are moved forward to allow access to the third row. Thanks to this system the Pathfinder offers what is arguably the easiest third-row access in any family car available in America. Carpoolers rejoice!
A potential tradeoff is the fact that Nissan's midsize crossover, unlike rivals Honda Pilot, Toyota Highlander and Chevy Traverse, seats only seven rather than up to eight. But perhaps Nissan is just a bit more realistic about how many can be properly seated in an understandably tight back row. Like its competitors the Pathfinder doesn't offer much cargo capacity with all seats filled, but with one or both split rear seatbacks folded out of the way the space becomes very generous.

Pitch-Perfect on Road
One of the most endearing features of the Pathfinder is its on-road manners. Pathfinders of old had a strong off-roader following based on their rugged construction and go-anywhere demeanor. Today's Pathfinder is a kinder, gentler version that emphasizes everyday comfort while giving up some capabilities in the whoop-de-dos. For a vehicle with a relatively high center of gravity, body roll is minimal even under hard cornering, and the nicely weighted steering feels responsive and has laudable on-center manners that lessen fatigue on long trips.

Power and Economy
While the Pathfinder's continuously variable transmission (CVT) came in for some criticism when it was introduced, now Nissan has altered it a bit to make it feel more like a traditional automatic transmission. It does a good job in tandem with the 260-horsepower V6 in providing both strong performance and praiseworthy fuel economy. In keeping with its car-based origins, the basic Pathfinder is a front-wheel-drive vehicle, while an All-Mode 4x4-i intelligent all-wheel-drive system is optional on all trims. The system enhances traction on wet and slippery surfaces and offers a full-lock setting for use on particularly challenging terrain.
If you dislike fingerprinted touchscreens as much as we do, you'll be pleased to learn that the Pathfinder offers an infotainment system that is controlled by buttons and knobs. Ditto for heating and air conditioning functions, and while some might call us Luddites, we reply, "We just want simple, easy-to-understand controls." Other features that gained our favor include a hidden storage bin aft of the third row, built-in tie-downs and flip-out coat hooks.

The 2016 Nissan Pathfinder is available at all 7 Mossy Nissan locations in San Diego County. Shop for yours today!